The Tower Mountain Gold Property (“Tower Mountain”) consists of 115 single cell mining claims, 64 optioned claims, 11 boundary claims, 1 owned patent and 5 patents held under option, totalling 2,038 hectares.  The Company is earning a 100% interest in the property and all agreements are current and in good standing. 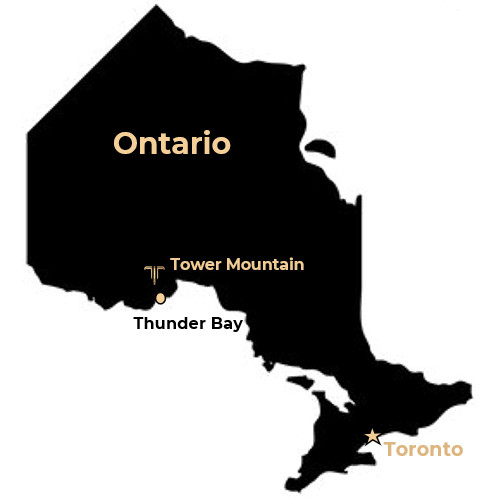 Twenty-six (26) gold occurrences have been identified to-date, within and adjacent to the TMIC, suggesting at least one phase of the TMIC was enriched in gold (REFERENCE FIGURE 1.0). The majority of the known occurrences to-date lie within a 500-metre halo surrounding the TMIC. All diamond drilling to-date has largely focused on a 1,500 metre x 500-metre-wide area west of the TMIC that includes the UV and Bench showings, the most advanced showings discovered to-date.

Drill results indicate broad, consistent, low grade (>0.10 and <1.0 g/t) gold mineralization persists over several hundreds of metres in virtually all holes drilled to-date. The gold mineralization is localized within brecciated and altered alkalic volcanic rocks surrounding the TMIC and is associated with variable sericite-pyrite alteration with brecciated alkaline volcanics. Higher grade gold mineralization appears localized within and proximal to syenite-monzonite dikes and sills, the orientation and frequency of which is currently being evaluated. Pyrite content appears to be a key indicator of increased gold grades and Induced Polarity has been proven to be an effective vector for exploration success, particularly at the Bench target.

The Company believes that the gold mineralization at Tower Mountain may represent the upper expression of an Intrusion Related Gold Deposit (“IRGD”). IRGD-type deposits offer increased opportunity for Tier One gold discoveries, typically offering deposits of greater than 100 M tonnes, averaging between 0.75 to 1.25 g/t Au and containing greater than 5.0 M oz. of gold. The Company advises that this represents the exploration target it is seeking to establish at Tower Mountain through systematic exploration.

The current database for the property consists of: 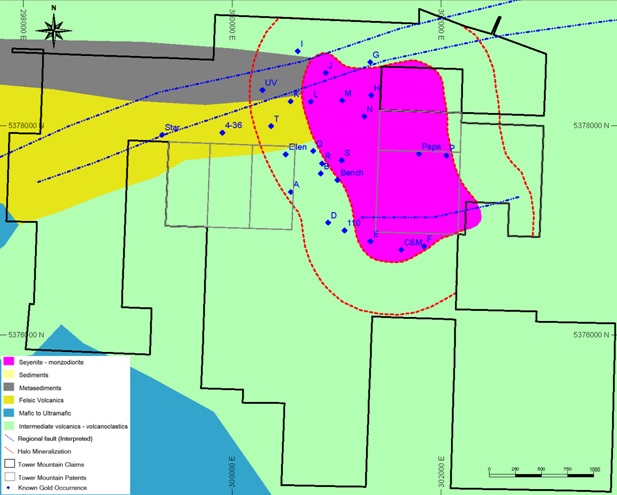 The Company’s exploration to date at Tower Mountain was undertaken with the following objectives:

Significant results of the 2021-22 Exploration program include:

In Q3-2022, the Company submitted twelve (12) samples for preliminary metallurgical testing to evaluate potential processing options and metallurgical recovery rates of typical Tower Mountain mineralization. The samples were collected from representative half drill core from various grade bins. 5-10 centimetre pieces within each interval were sent for petrographic analyses and another small sample was collected from each metallurgical interval and submitted for whole rock geochemical analyses.

Standard, bottle roll cyanide leach tests were completed on 2.0 kg charges. Each sample was crushed and pulverized 80% passing 75 µm. The samples were placed into a 40% by weight solution with 1.0 g/L NaCN and rolled for 72 hours.

The bottle roll tests indicated metallurgical recoveries ranging from 72.5% to 94.9% and averaged 86.8% for the twelve samples (REF. Figure 2.0 – Gold Leach Kinetics – Tower Mountain – 2022). The results suggest that the Tower Mountain mineralization is amenable to direct cyanidation recovery methods, that the mineralization is not refractory and recoveries in excess of 90% are likely achievable. 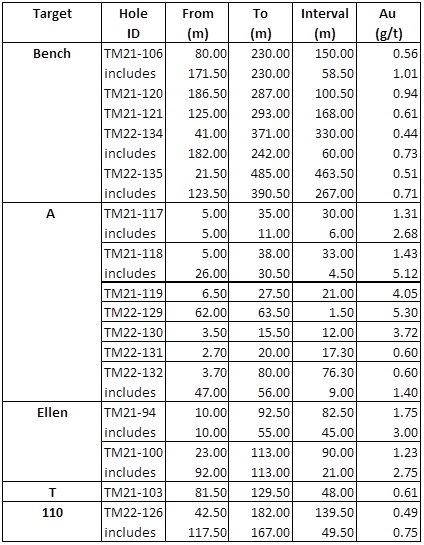 Note: drill hole intervals are not representative of true widths.

By submitting this form, you are consenting to receive marketing emails. You can unsubscribe at anytime by using the unsubscribe link, found at the bottom of the emails.